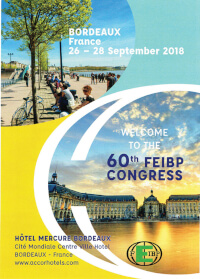 A record number of participants attended this year's jubilee event. Delegates and their partners, first-time participants, press representatives from Europe and guests from the USA travelled to Bordeaux to enjoy three sunny days in a charming landscape and unique cultural backdrop.

Bordeaux is a port city located on the banks of Garonne River in the Gironde department of south western France. It is a city of art and history, a jewel of the 18th century, has been a UNESCO World Heritage Site since 2007 and is the centre of the famous wine-growing region. The city's famous landmarks include the Gothic cathedral Saint-André, buildings dating from the 18th and 19th centuries as well as first-class art museums like the Musée des Beaux-Arts de Bordeaux. Public gardens extend along the winding banks of the river. On the imposing Place de la Bourse, in the middle of which stands the Fountain of the Three Graces, the Miroir d'Eau creates fascinating mirror effects.

Many thanks to Danièle Quemper, Pierre Simler and Jean-Pierre Causero from the FFB (French Association of the Brush and Paintbrush Industry) for their exemplary organisation, and kind care and attention during the congress, which took place in a pleasant and informal atmosphere.

The professional quality of the speakers, the mix of topics and impressive contributions stimulated the joint discussions. Many productive discussions and animated conversations also took place between colleagues and speakers during the Brush Forum as well as in the various meetings of the working groups The interactive sessions and workshops on the future of our industry opened new lines of thought and provided new perspectives.

The impressive supporting programme with golf tournament, Gourmet Boat trip on the Garonne, and a tour of the wine region with wine tasting and gala evening at the Château Couhins-Lurton winery pleasantly rounded off the anniversary event. The European Brushware Federation was pleased with the convivial atmosphere and good mood during the gathering, and were endeavoured to foster a friendly and welcoming environment for their colleagues from the ABMA.

Another highlight was an outing to the bay of Arcachon, which is famous for oyster farming, and the seaside resort of Arcachon some 60 km from Bordeaux, with casino, beautiful shopping streets, a large sandy beach and extravagant villas dating from the 19th century. South of Arcachon lies the Dune du Pilat, Europe’s biggest shifting sand dune.

The delegates were very enthusiastic about the new anniversary book 60 Years of FEIBP Congresses and thanked the Suzanna family and Andrea Acquaderni for their efforts and revision of the reference book — a contemporary document about 60 years of FEIBP history. The book is available from the FEIBP Secretariat and costs 30 Euros. Orders can be sent to info@feibp.eu. The book will be dispatched with an invoice.

The 61st FEIBP Congress will take place from 26-28 September 2018 in Lucerne (Switzerland). The convention will be organized by FEIBP President Peter Langenegger (Ebnat AG) and his colleague Peter Brunner.

Brush Scene® reports extensively on the 60th FEIBP Congress in Bordeaux/France with numerous color photos in its final edition (November-December, issue 6/2018). This edition is available as a subscription.