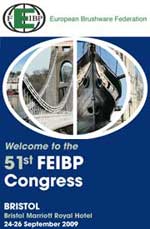 The 51st Congress of the European Brushware Federation (FEIBP) took place from 24th to 26th September 2009 at the Marriott Royal Hotel in Bristol England. Henk Slettenhaar, the newly elected president of the FEIBP, welcomed delegates, who had come from all over Europe and from the USA to attend the popular event.

After the official opening ceremony conducted by Henk Slettenhaar, there followed a short review of last year’s 50th edition of the congress in Marseille/France.

This year's meeting focussed especially on the impact of the current economic crisis on the brush trade.

The FEIBP had invited two guest speakers. Trevor Baylis, a famous British inventor gave a talk on „The importance of innovation to our companies“ and David Silver, of the company YearsAhead, focussed on „The effects of the ageing population in Europe on our companies and our customers“.

Mark Godfrey, the newly elected President of the American Brush Manufacturers Association ABMA, reported on the current situation of the brush trade in the USA and invited delegates to the 93rd Annual General Meeting of the ABMA from 16th to 20th March 2010 in Champions Gate, Omni Resort, Orlando, Florida.

Dr. Andrea Acquaderni, newly elected treasurer of the FEIBP, disclosed the FEIBP financial statement results for the year 2009 and gave a preview of the year 2010.

One of the highlights of the meeting was the presentation of the 4th FEIBP Innovation Award. Zahoransky AG, Germany, won 1st prize for their „Fully automatic mould injection cell for broom and brush bodies“. Second prize went to Vikan A/S, Denmark, for their innovative „Hygienic 2-component double blade squeegees“, and the company Banat Firca ve Plastik San. A.S. from Turkey was awarded 3rd prize for their product „Acrobat adult toothbrush with special designed handle“. Zahn Pinselmanufaktur, Germany were awarded 4th prize for their special artist brush with Bristlon filling.

Thorsten Stollberg, Chairman of the German Brush Manufacturers Association, gave a short preview of the 52nd FEIBP congress which will take place in Hamburg, Germany, from 16-18 September 2010.

Brush Scene® will report and comment extensively on the 51st Congress of the FEIBP in the November/December edition of the magazine. This edition is available by direct subscription.